Gaden Monks bring the Spirit of Tibet to Ibiza

“The Tibetan monks of the Gaden Shartse monastery have just left our AyurVida natural therapies house. It has been two wonderful weeks with them, still there are between our walls the mental forms of balance, good humor, tolerance, compassion, emptiness, everything, patience, easy laughter, sanity, spirituality without mental exaggerations , the analysis, the sounds of drums, bells trumpets and deep songs, the smell of Tibetan incense, the saffron color of their clothes “

The Tibetan monks of the Gaden Shartse monastery have just left our AyurVida natural therapies house. It has been two wonderful weeks with them, still there are between our walls the mental forms of balance, good humor, tolerance, compassion, emptiness, everything, patience, easy laughter, sanity, spirituality without mental exaggerations , the analysis, the sounds of drums, trumpet bells and deep songs, the smell of Tibetan incense, the saffron color of their clothes. The parade of beautiful people who every day came to enjoy some legendary moments on the other side of the mirror, on the other side of the world, the prayers of the meals, the calm and powerful looks and the subtle essence of a people that has dedicated their time and effort to learn from the mind, to be compassionate, open and tolerant, and to try to unravel the mysteries of the Universe.

They arrived from the Peninsula on April 7, by boat. We have been working and helping and being helped by the monks of the Gaden Shartse monastery for 8 years. We know their monasteries, and their inhabitants, we have been on ten occasions and we have been carrying groups to the monastery for several years, to live there in situ with hundreds of monks, the essence of this culture.

We also know your needs. As a people in exile, it lacks a state that subsidizes or protects it. India has given them the land, but it does not pay their expenses, and governments do not have it easy since the shadow of China and its right to veto in the UN always paralyzes any state aid. As a result, all their funding depends entirely on the tours they carry out in different countries of the world. 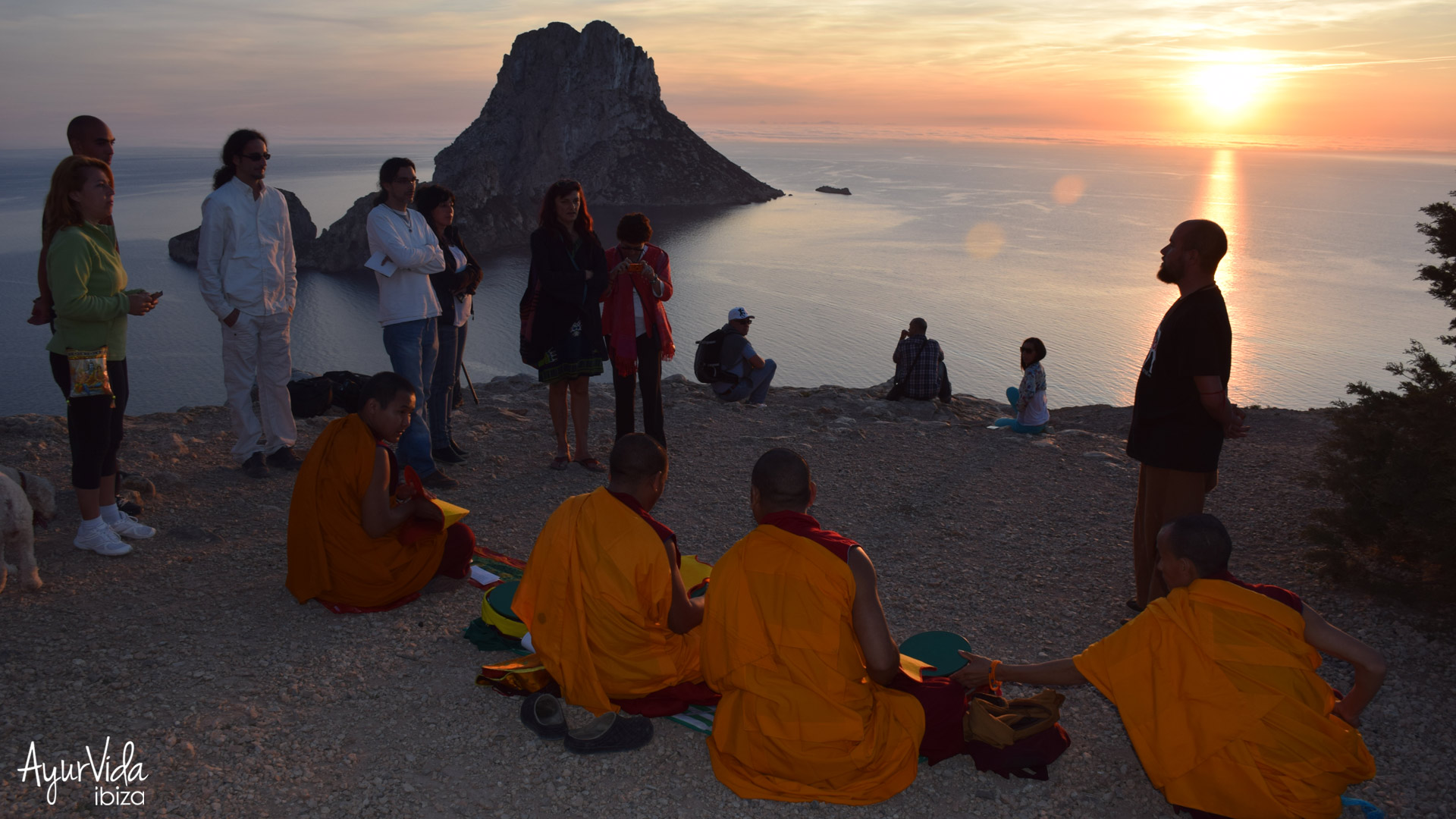 When they told me they were on tour in Spain I called them to ask them to come to Ibiza to continue the tour and bring that part of their spirit that comes so well and we both enjoy it and even need it. He had his risk, since only the cost of the trip and the stay exceeded 2,500 euros. When they ask us why we have to pay to attend the ceremonies that monks do and why they sell things to earn money, the only possible answer is because they are paid absolutely all expenses, including transportation, food, visas, advertising, etc. . And besides that money, hundreds of monks of that monastery of Gaden eat, live, dress, educate and cure themselves. I tell people that if there was someone to subsidize their food, shelter, integration and maintenance of hundreds of monks fled Tibet every year, in addition to their expenses, they would do everything for free and could go out to the world to share their wisdom, good humor, and their techniques for free. They also tell us that if the monks worked they would not have to ask for their rituals. Well, that’s right, they do not ask; they work, they exchange time and effort for colored papers that will be transformed into food, medicines, books and roofs. In addition, the benefit they bring out with their mission is shared among hundreds of monks, not between an enlightened guru and his secretaries. 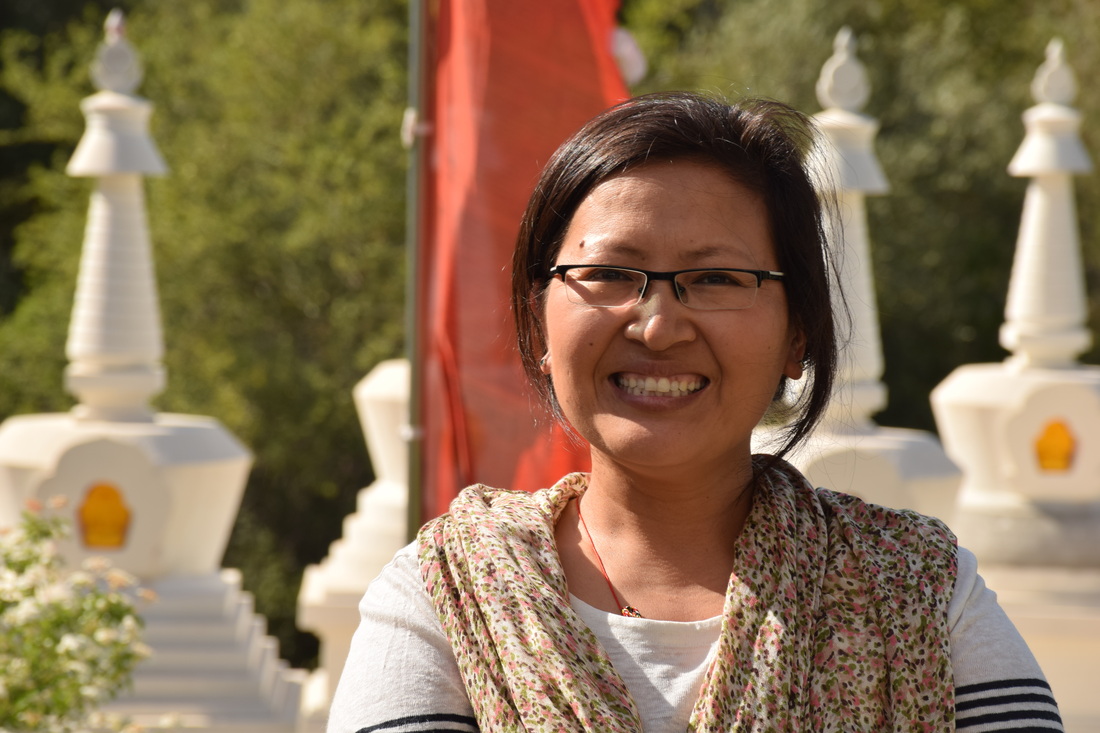 Since we are almost newcomers to the island, we do not have many contacts or acquaintances, but little by little we get to know people related to the things we do and like, which are what we want to transmit. At first there were few people, but every day more people learned about the presence of the monks in Ibiza and more and more people were coming. They made several “pujas” (rituals of offerings and blessings), and initiations (empowerments in the attributes given to a deity), conferences and consultations of astrology. The Tibetan doctor who travels with them, Sangye Dolma, went through several consultations and offered Tibetan natural medicines.

Between ritual and ritual we verified for the umpteenth time that the monks – serious and ceremonious during the ceremonies – are absolutely funny, enthusiastic, imaginative, tolerant, intelligent and rational. We went to bathe with them in different coves of Ibiza, such as Cala Galera, Benirrás, Cala Salada and las Salinas, and walked along the beach of Figueretas, in front of the house, in the mornings. They were impressed by the beauty of this island, its shores, and turquoise waters. They enjoyed every moment they had free to contemplate. As far as I know they have transmitted many smiles, a lot of tranquility, very good vibes, and those who have wanted to listen to them have been taught clarity of mind and sanity. 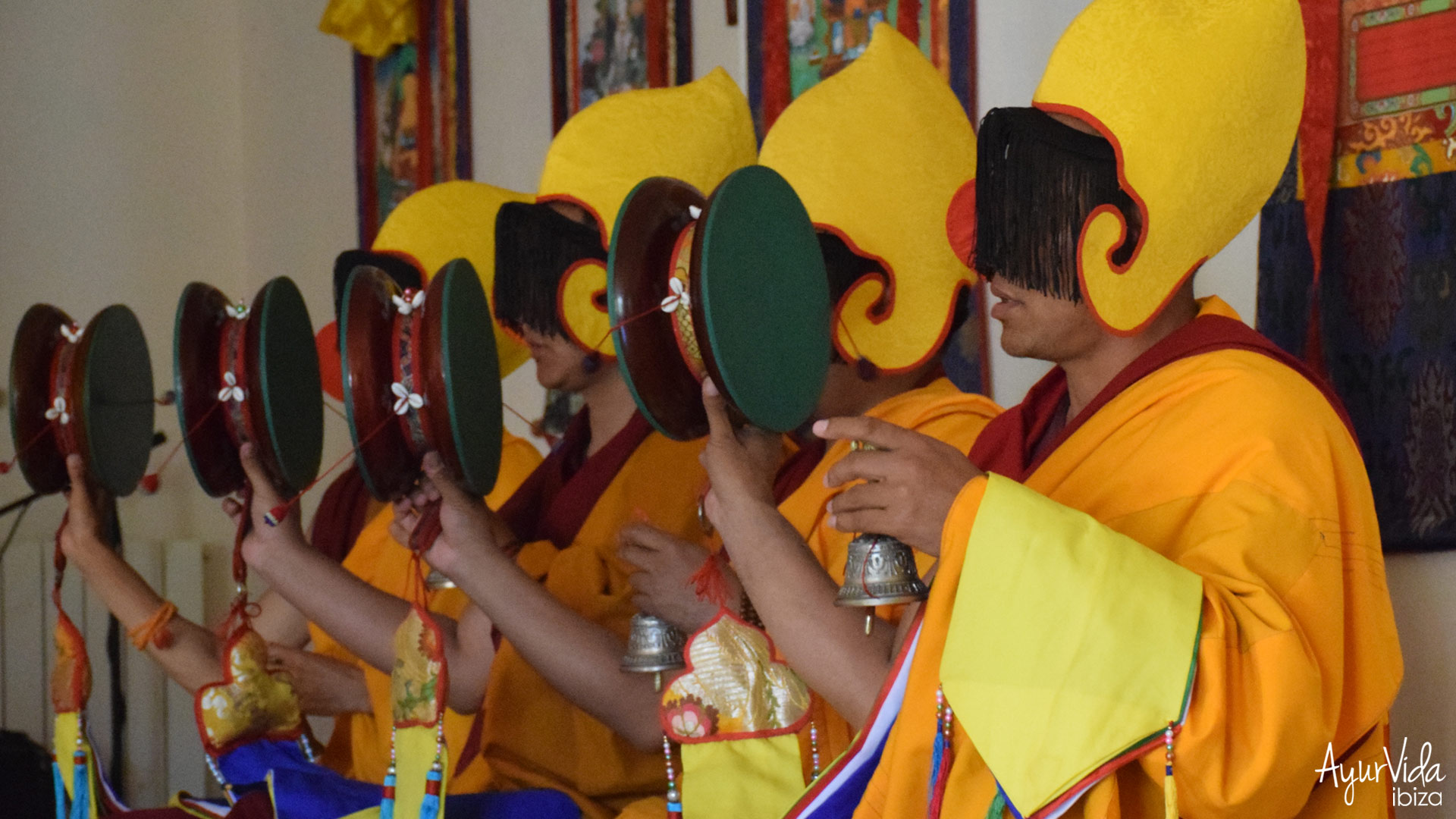 Do not think that Buddhist philosophy believes in everything that is not seen and that everything that goes through the mind is real: constantly avoid mental exaggerations, especially in these times in which there is so much charlatan and so much spiritual invention and we have that we walk with feet of lead to avoid falling into the subjective and the sale of smoke.
We hope they can return in September and that we have more time to prepare for their arrival, and more people can benefit from their teachings and know how to be (call energies, vibrations, wave, or how everyone wants to call the feeling that one has when he meets these people on the other side of the World).

Whoever wants information about these monks of Gaden, collaborate in the September tour or trips to their monastery, you can call or write us, we will be happy to help you communicate with them.

(Soon we will upload all the photos of the April tour) 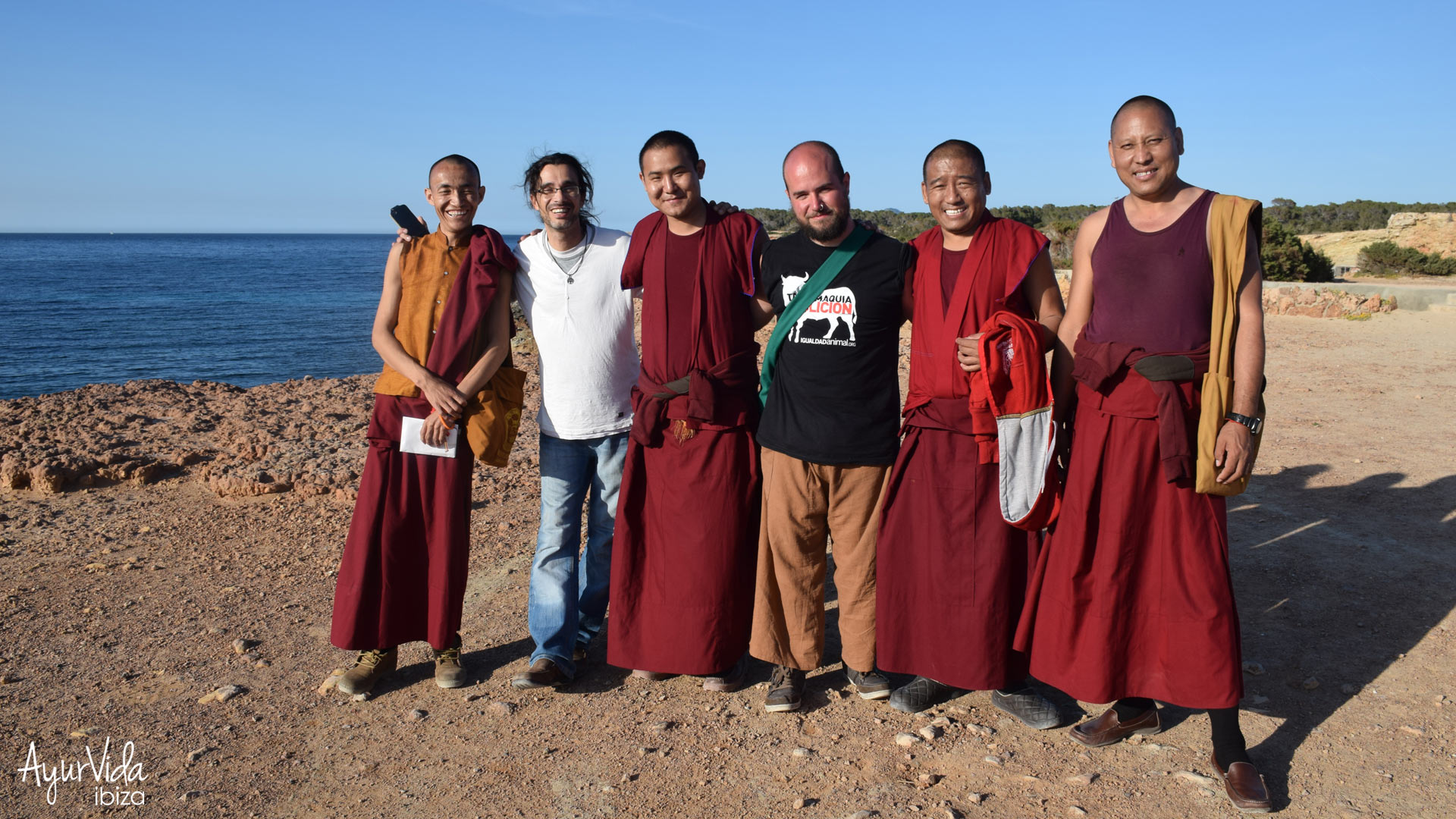 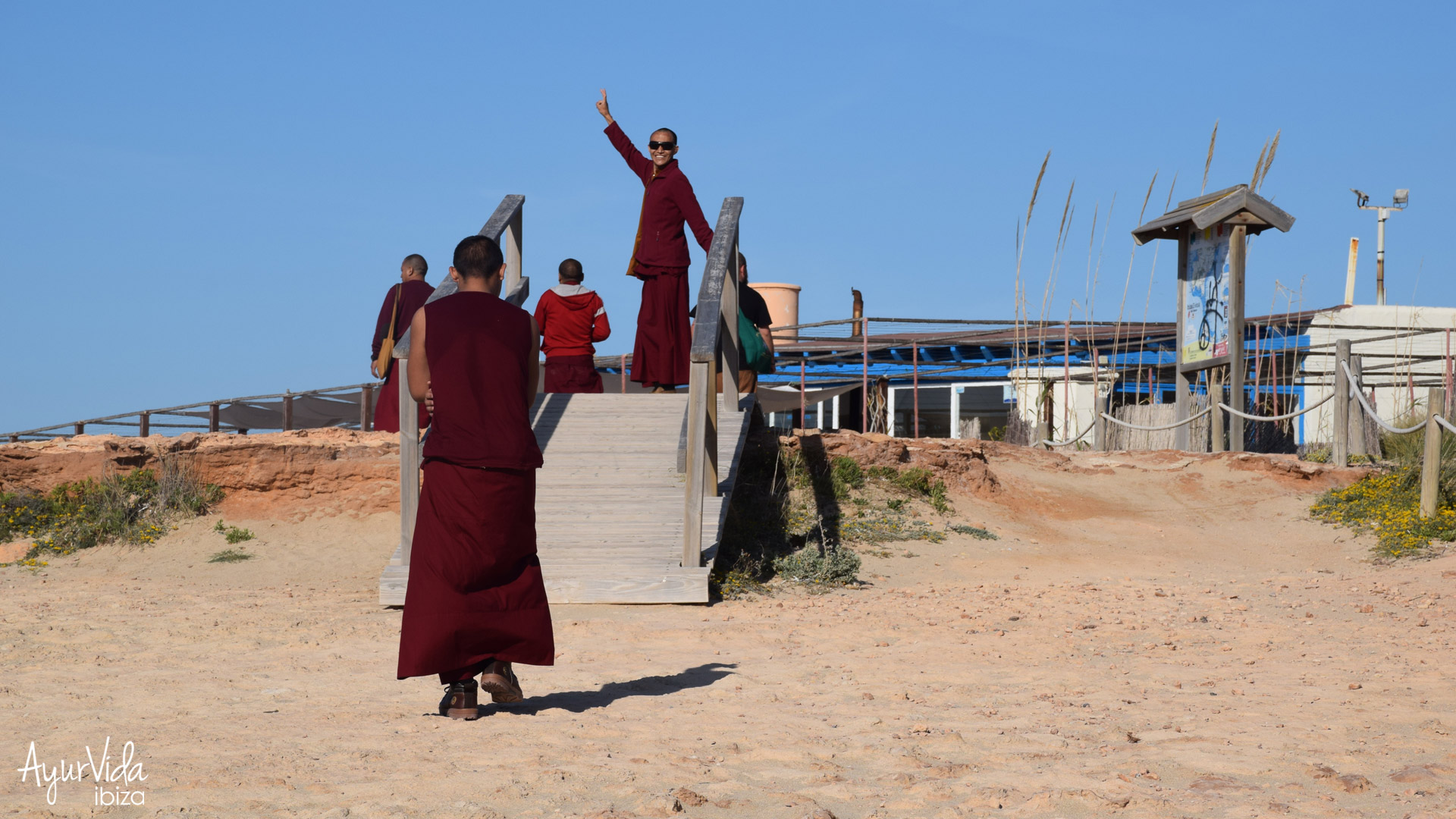 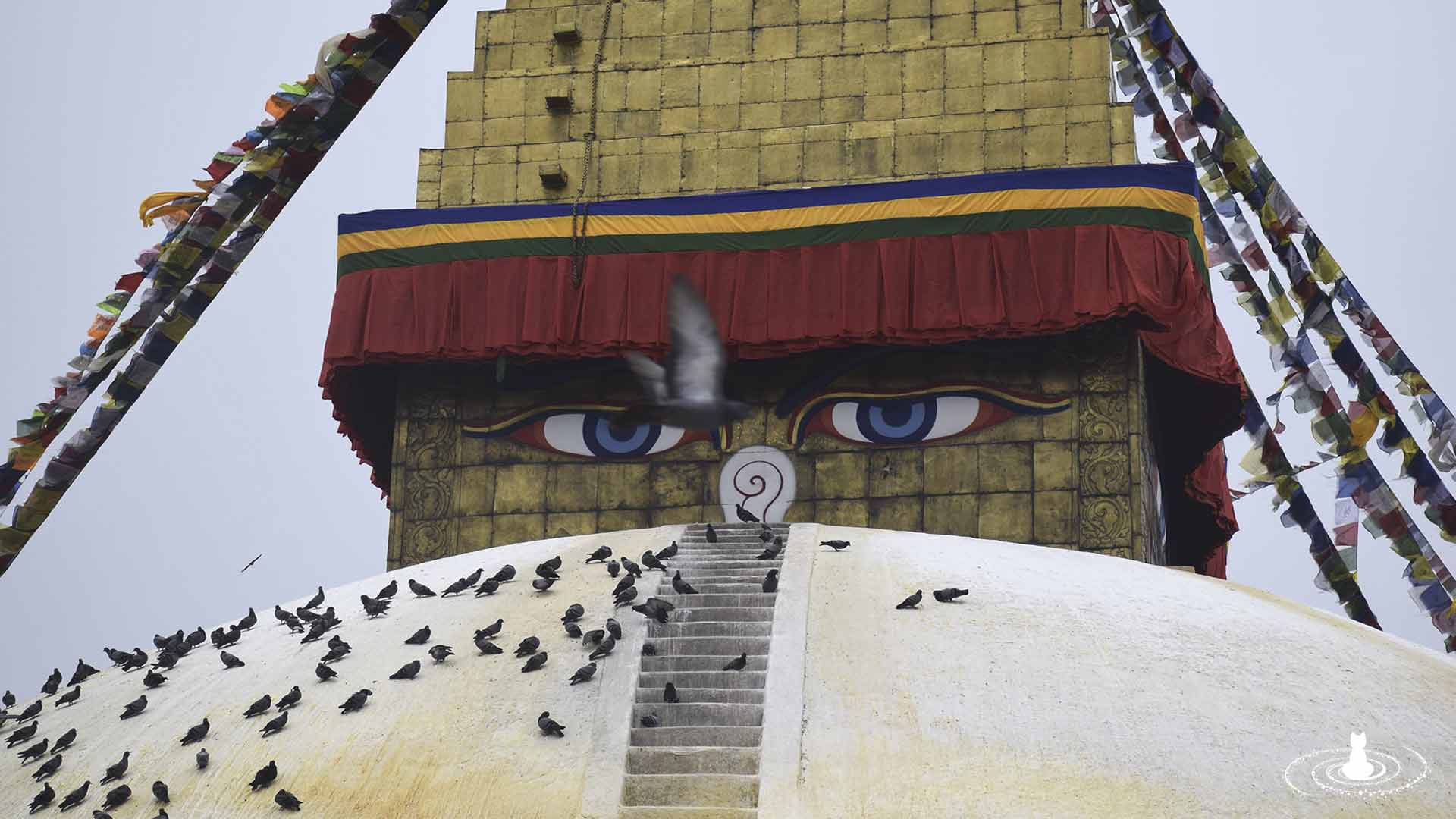